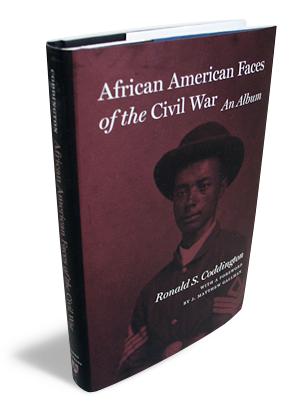 The origin of African American Faces of the Civil War: An Album is a chance meeting with a reader at the Baltimore Book Festival in September 2004.

On a rainy Saturday in the wake of Hurricane Ivan, I visited the annual festival to sign copies of my first book, Faces of the Civil War: An Album of Union Soldiers and Their Stories. This was my inaugural event as a first-time author, and I was eager to participate. Early on, a woman stopped by my table and carefully thumbed through the book. Pleased with her interest, I was caught off guard when she handed the book back to me. “You know, there were men of color who also fought.” She turned and walked away without waiting for my reply.

Her words stayed with me. In 2008, after the publication of Faces of the Confederacy: An Album of Southern Soldiers and Their Stories, I knew that this would be my next book project.

After four years and countless hours of research and writing, I came away with a profound appreciation for the men of color who participated in the epic Civil War to end slavery. Those who survived went on to fight another war—against prejudice—that would continue far beyond their lifetimes. This volume includes 77 representative portrait photographs, many published here for the first time. All of the images are identified, wartime likenesses of the individuals, each accompanied by a personal account of his life and military experience.

The images and stories are representative of the more than 180,000 African Americans who participated in the Civil War.

About the Cover Image 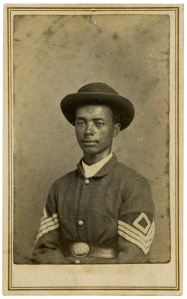 The cover image selected by The Johns Hopkins University Press is 1st Sgt. Octavius McFarland of the Sixty-second U.S. Colored Infantry. His story appears on pages 190-192 in the book. The choice of this carte de visite contrasts with Union Faces, which features an unidentified soldier to represent the millions of volunteers who served. Although this portrait is of a known soldier, 1st Sgt. McFarland’s likeness is representative of the roughly 200,000 men of color who enlisted in the Union army and navy after President Abraham Lincoln issued the Emancipation Proclamation on Jan. 1, 1863.

The vast majority of these men, including McFarland, were born in bondage. He gained his freedom the moment he enlisted.

McFarland sits before a unknown photographer dressed in his uniform and sporting what appears to be a non-military hat.

This wonderful portrait is part of the collection of the Gettysburg National Military Park Museum. I happened to see this image during a visit to the museum in 2008. I knew instantly that McFarland’s likeness would make a great book jacket. The following year I made arrangements with museum staff to get a high-resolution digital scan for the book. In 2012, I suggested this image and a few others to the designers at The Hopkins Press as candidates for the jacket.

All the Faces books are available for order through the publisher and other booksellers. Signed copies are also available for purchase.